Fuck, I love this toasty weather and I don’t care who doesn’t. After all my years in the kitchens of the world my perseverance in sweaty locales is finally paying off. It would appear that we have been blessed with an early summer and I for one am not complaining. I reckon that in the last week we, the denizens of Melbourne, have had more sun and fun than the whole of Hibernia put together over the last 3 wet summers of theirs.

If the elevated ambient temperature isn’t enough to get you excited how about the long overdue return of thunderstorms. Now don’t get me wrong, we have had a few thunderstorms in the last 7 years or so but by and large they have all been dry events without even the slightest drop of electrically charged uisce beatha to give us a good soaking. It might have been just two weeks ago when we had stormy weather on both Friday and Saturday nights and what storms they were. In Australia wet and wild thunderstorms generally only last an hour two before they blow over and hit somebody elses back yard, not like back in the old country where they could go on for the best part of a week and linger around like an unwanted guest from Leitrim.

I happened to be out on both these nights and have the photos to prove it. On the Friday I caught up with some old friends at the Wesley Anne(Lesbianne) before schmoozing on down to Bar Nancy to see me old mucker Zen. It was while we were counting our blessings and the percentage contained within that the first of the weekends thunderstorms passed us by. 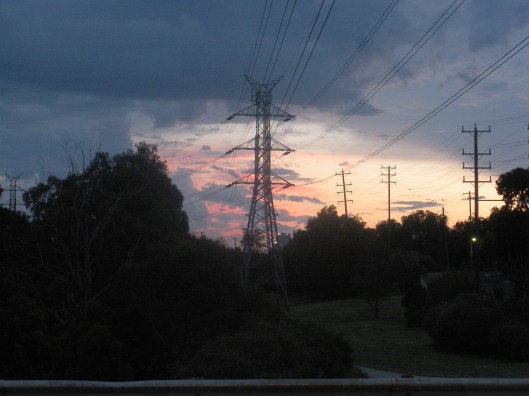 Beauty and the beast

This was the scene a few hours before Thor gave us what for.

Perhaps it is just something in my name, refer to previous blogs, but I can’t help but love the old thunder and lightning malarkey. It might also have something to do with the spark of life that they provide and that I have been known to do the same. Do not under any circumstances take that last conceited remark seriously!

The night progressed as they generally do in my neck of the woods; a long walk home, some supper and then a dose of Carl Sagan’s ‘Cosmos” before closing my eyes on another wonderful days existence.

I do however believe that the good Mr Zen, as seen sporting a marvellous face warmer here, would have considered such an early retirement cowardly in the extreme and most untoward for one as young as myself. Zen never sleeps without saying hello to Dawn first.

The big storm occurred on the following night and yet again I was to be found in the general vicinity of Northcote.

I was out the back of The Northcote Social club with all the new metros in their freshly ironed shirts and spikey hair dos when the mother of all showers descended on us. It is a funny thing but over here in dry Australia we sometimes forget what rain sounds like. There are occasions when young ducks and animals get the shock of their lives when they get rained on for the first time in years. These events make the feel good news sections of the evening tabloid tv shows and everybody goes ‘aahhhhhhhhhh the stupid fuckin’ duck!’

Sadly though for us the thunderstorm was the only bit of excitement to be had in that neck of the woods until we happened to stroll into The Lomond Hotel on the way home for a night cap.

Several things became obvious as myself and Steve downed our first pots of pale ale; firstly that we were the youngest patrons of the bar by a good dozen years or so and secondly that there was to be entertainment of the four piece female fronted band variety. 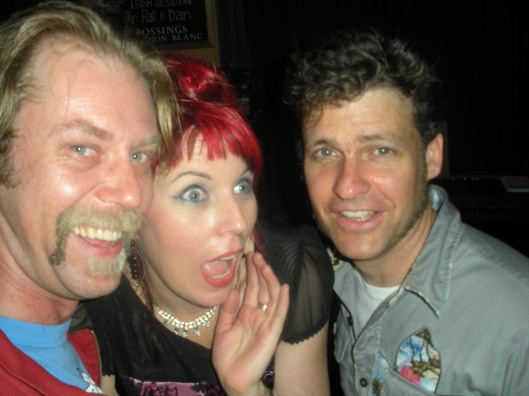 Are we famous now?

Little did we know then just how many more pots of ale and shots of whiskey were gonna disappear  down our throats before our heads hit the pillows but a good half dozen would be a fair guess. The band turned out to be Lil’ Fi, which must have been a reference to her shoe size as there was nothing diminutive about her voice or on stage persona. Myself and Steve were quietly impressed with her commandeering voice which she used to sing songs from the greats; Billie, Ella and Dinah. I’m sure there was more but my memory is truly fuckin’ atrocious.

Next up on the social diary was Bev and Lloyd’s Melbourne cup day party. This is an annual event attended by a mixed bag of locals, fly ins and passers by.  There is  nothing scandalous or astounding about this even but I was in the right place at the right time and my camera was with me too. One cannot plan when a couple engages in a sweet kiss in Paris or  when a wrinkle on an old face tells the story of our generation and likewise one couldn’t have planned to get the following four formidable women to sit side by side and all be decked out in rouge. 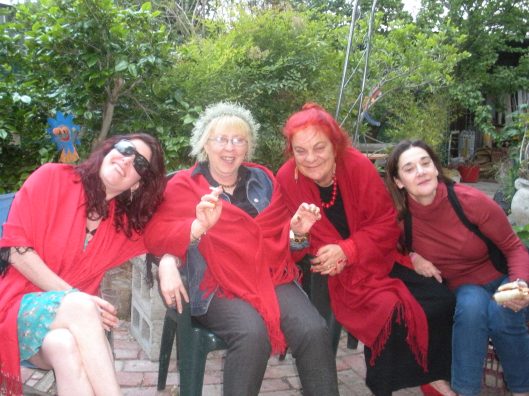 Next up is the lovely business of matrimony and in particular between a good friend of mine, and fellow blogger, and his beautiful new companion. I was going to use the partner word there but abstained because I truly hate that word in the relationship sense more than any other word I can think of.  ‘Athlone’ as a word and a place comes a very close second.

"Hard day at the office dear?"

So it was to be that the Gallant Janne and the Joyous Josara were to be wed in Melbourne and I was honoured to be asked to be an official witness to their betrothal of everlasting love and happiness. The weather was perfect, the groom was dashing, the bride was beautiful in blue and everything went swimmingly well. After a brief ceremony at the registry office on Spring st., and what a lovely office it was too, we all repaired back to The Old Colonial Pub on Brunswick st. for refreshments and  comestibles.

Let me first admit that the last time I had the dubious pleasure of patronising this pub I got horribly trashed on grand final day and the previous time I happened to fall off a bar stool after just 2 sips of beer! On this occasion I noticed that the chef on duty was an old partner(correct use of the word) in crime and an absolute nutter. He did however put on a fantastic spread before he headed off to headline at The Espy in St Kilda and perform sordid sex acts on himself while fronting a band, and nobody has since come down with anything other than a hangover.

1 thought on “Thunderstorms, redheads and weddings plus other musings.”