Hello dahlings, it is with a slight hangover that I present my report on the opening night of the St Kilda Film Festival and after party. And what a night it was too. Nothing disappointed  apart from my backside’s ability to stay comfortable in the  vintage seating of the dress circle. So here begins my short film marathon of over 100 films and events to which I have pledged my attendance.

The night got off to a pleasant start with pre-screening drinks at the Dog bar accompanied by a warming breeze coming off the bay and the gypsy airs of the sartorially attired accordion player providing the soundtrack to the soiree.  A short stroll across the tram tracks was rewarded with the vista of The Palais Theatre basking in the glow of lights and festival goers. 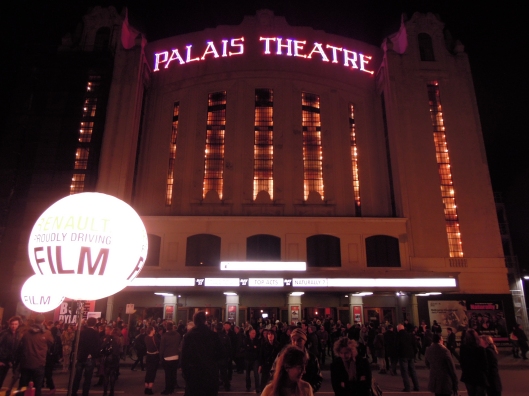 After the initial speeches and acknowledgements were made the evening got off to a suitably cinematic start with the world premiere of ‘Suspended'(the films were all world premieres).A beautifully shot film invoking magic and what I thought to be the spirit of Close Encounters of the Third Kind with its mountain/storm sequence.  Director Damien Walshe-Howling and producer Lisa Shaunessy  have done themselves proud and managed to extract a great performance from a talented young actor whose name eludes me.

‘Burn’ was the next offering on the programme and succeeded in setting the screen aflame with its fast paced portrayal of skateboarding parkour in Buenos Aires during a tornado. In contrast to the laid back country setting of ‘Suspended’, ‘Burn’ blazed a trail through the concrete jungle of La Boca, Buenos Aires. Producer Morgan Brading and director Ash Bolland are sure to have a career awaiting them in high energy sports ads.

‘Am I ok’ kept the pace going but confined events to a therapy session and  questions that we all find ourselves asking ourselves and perhaps not always answering truthfully.  Producer/director/writer/actor Matilda Brown has done her parents proud who hopefully do not find themselves asking the same soul-searching questions of existence and compliance in todays altogether confusing world.

‘Sidewalk Scribble’, a brief animated piece by director and producer Peter Lowey was simple and beautiful and served as a delicious palate cleanser before being thrown into the apocalyptic world of ‘Transmission’ and impromptu driving lessons(I dispute the legitimacy of the phrase POST APOCALYPTIC). Another strong performance from a child actor in this film from producer Liz Kearney and director Zak Hilditch should perhaps scotch the old maxim of never working with children, animals or politicians.

The first belly ache of the evening was induced by Summer DeRoche’s ‘The Globe Collector’. At only a tad under seven minutes long it managed to cram in more laughs than most Hollywood rom-coms of the last decade.  For the first time in the evening I was distracted from the pain in my derriere and momentarily forgot that I was a 6’2″ man with love handles in  seating designed for oompalumpas.

The most beautiful and visually mesmerizing film of the evening could only be ‘Into the Sun’.  A fluid motion of water and form that reminded me of Terrence Malick’s ‘Tree of Life’. Director Amy Gebhardt has well and truly succeeded in creating art that moves and drenches the viewer in richness and blue.

The ‘no brainer’ audience favourite of the night would have to be ‘Bonny Doon’.  A hilarious road movie of facial expressions and movie referencing. It would be hard to imagine anybody in the audience not being familiar with ‘The Castle’ which is the butt of many a laugh in this seven minute nugget of comedy gold.  If you only see two films this year, make sure you see The Castle first then ‘Bonny Doon’ straight after. The double act of Steven Curry and Dave Lawson should not be missed!

And now  the pictorial section of today’s blog: 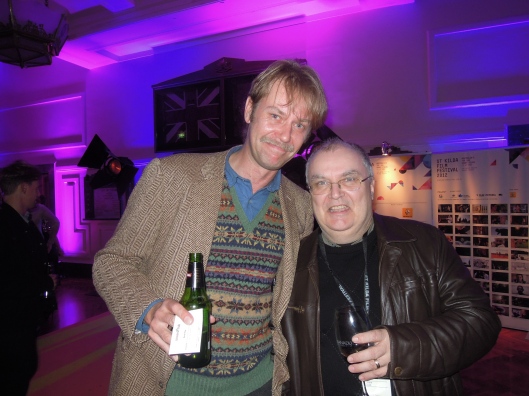 The festival director and world champion pun maestro Paul Harris was brave enough to pose with a giant.

Even though I have a dim view of organised faith I have been religiously listening to Film Buff’s Forecast, and in particular Paul Harris, for close on 10 years now. Saturday noonday is  mass time for me with the quip holding, repartee loaded, double entendred, fully retorted Paul Harris. RRR is lucky to have such talent for free. 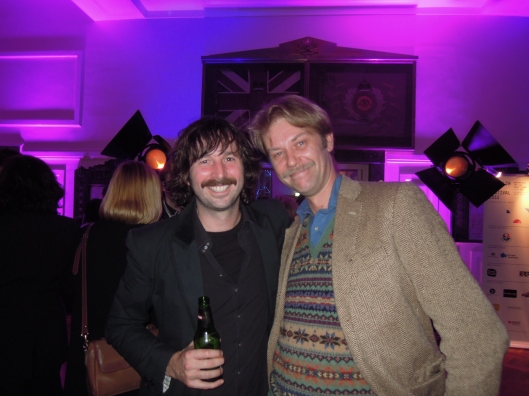 The moustachioed Dave Lawson keeping it reel. This one is going straight to the pool room. Incidentally, this picture was expertly taken by the film’s director, Matthew Saville. 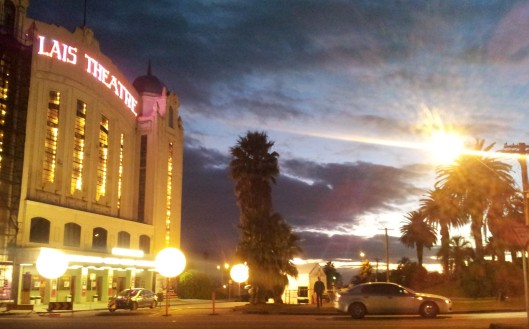 The setting for the festivities at twilight. 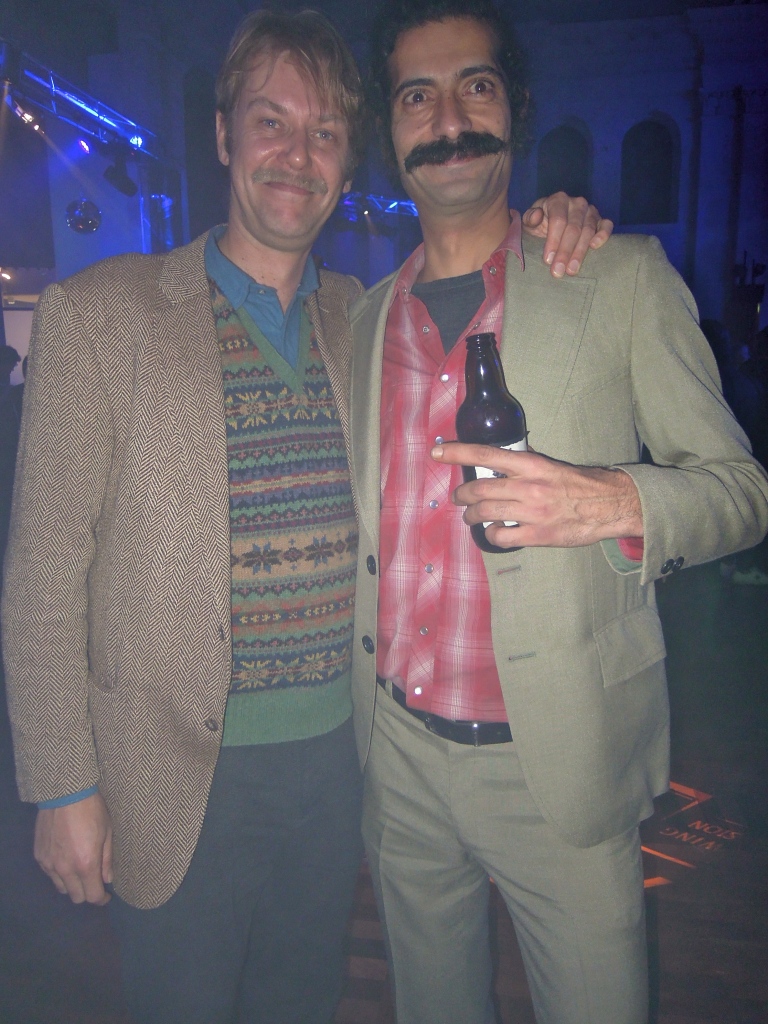 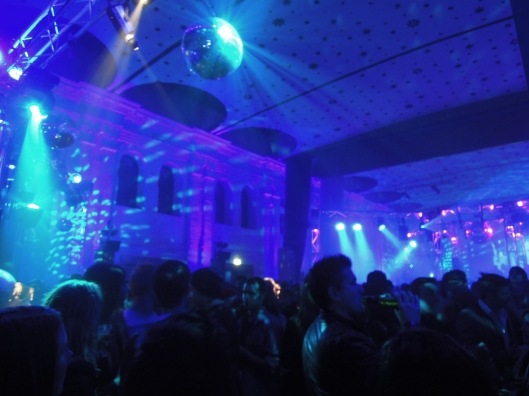 The St Kilda Town Hall after party. Who needs Cannes, this is where the real horse trading gets done.

And now I must freshen up and head south of the river once more. I hope my north-south visa lasts the week otherwise i may have to camp out at The Astor.

Follow this link to Screen Hub Australia’s website and their opening night review with thanks to David Tiley, editor. Includes clips and links with no need for subscription.