Sitting down to write award winning prose is not all it’s cracked up to be. I had several paragraphs of beautifully arranged words and witty retorts all written in the shower, then when I put the laundry on I did some editing and gave the piece a nice bit of spit’n’polish before finishing it off over some marinated chicken wings that were bracing themselves for the top shelf of the oven. The aroma of spice and chipotle wafted up in great pungent thunderheads and coloured my prose with exoticism and tongue tingling sensation. As I sat at the kitchen table finishing my morning latte I buffed every facet of my gem and held it up to the light to see my reflection in its brilliance. 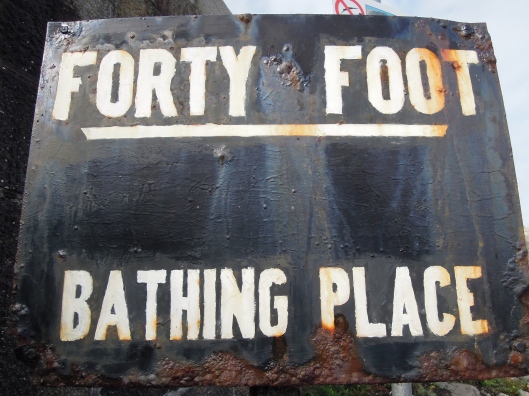 So named after the 40th foot regiment who were fond of skinny dipping in the chilly waters when they weren’t battering the bejaysus out of the locals.

After I contemplated the meaning of the phrase ‘polishing a turd’ I set about making a list of the things I’d misplaced on my recent trip to Europe. Stuff like money and socks are perennial inclusions followed on by time. A recent arrival on the scene. Luckily I am still the proud owner of a wee digital camera and an old smart phone but I can’t get over the loss of my shaving brush. I’m too traumatised to even write about it.

In my three week odyssey I lost the ability to spell the word ‘odyssey’ without spell check and I reckon a few words per minute on my typing speed are also lost for the time being. On a more serious note my body says to me ‘ok dude, enough with the teenage shenanigans already. You’ve just lost a month or two on your sell by date’. So now I find myself attempting to discard one vice into the bin and temper another down to manageable measures. One mustn’t set the bar too high on the umpteenth run as failure often offends.

I couldn’t find the right image so I’ve used this one. Not as funny as Mark Twain’s quote regarding loss, regret and mental acuity but still…

When I was a student studying science way back last century before the world was aware of corporate obesity and state sanctioned financial treachery I had a slight artistic streak in my genes. This manifested itself on the back of my lab coat by way of a hand drawn and coloured replica of a Roy Lichtenstein piece. This was a rather crazy thing to do in Athlone RTC as there wasn’t an art department or even a philosophical course on offer. Pop Art didn’t exist unless you considered the decor of The Waikiki Club as art.

Is art the result of inspiration or the trigger?  Is there an analogous relationship with perspiration? If the pharmaceutical companies started championing the modern arts would we call the result pop-phart?

You see, that’s the problem with probing thought, you tend to end up asking more questions and receiving proportionately less answers. What is the correct answer to ‘ou est le centre de George Pompidou?’

So, there we have it. I’m all worn out now and my tummy is rumbling. Chicken wings cooling on the sideboard, warmth in the spring air and things to do involving speaking bad racist Italian to my landlady(because that’s the way she likes it) and loitering with intent to linger on my porch.