“They’re like stray dogs. Nobody knows where they come from but still they turn up and hang around for hours before clearing off without so much as a by your leave,” said the tanned old man in the fish and chip shop on the corner. I nodded feigned agreement before asking for extra vinegar on my chips. He begrudgingly sprinkled a few drops of the (seemingly watered down) liquid on my fried spuds and flake as if he was baptising a baby with precious holy water. I left him grumbling under his breath about the council and pawing through the daily paper in his greasy empty shop.

The autumnal evening sun was slowly putting itself to bed somewhere over the Westgate bridge so I grabbed a seat in the nearby park and began to unwrap my carb’ rich fish supper. As the acidy fumes tickled my nostrils and overwhelmed the sweet jasmine in the evening air I couldn’t help but pay some thought to the crowd of snappily dressed and hirsute (male and female) punters lining up for overpriced tacos being dispensed from the gayly coloured food van parked on the street. I’d noticed this phenomena of late and had to agree that it was a novel idea and a welcome improvement on seaside Mr Whippy vans and Levantine kebab installations on disused garage forecourts that only open after the pubs close, before shutting up sometime before sunrise and the first tram.  I will confess that I have never been able to bring myself to enquire what sort of meat comes ready compacted on a spit, tastes bloody awful and can be used over and over again: I have abstained these past 20 years and my morning breath is all the better for it as my cat will attest to. 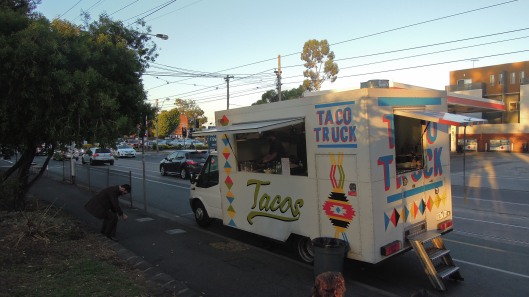 These vans have inveigled their way into the much lauded food scene of Melbourne over the past few years and ruffled the feathers of many local cafe owners to boot. And so they should. There are some overly praised dining rooms around town being a bit precious while they surf the wave of popularity and insist on punters queuing down the stairs and then being charged outrageous prices for a tin of sardines on toast. I can buy those tins direct and I’ve got a toaster too, all I need now is a snotty waiter with affectations to peel open the lid, decant the fishy contents onto my sourdough bagel and then sneer at me when I reach over to my fridge and grab a beer. Everybody has to raise their game and lower their prices to survive, which is good for the customer.

As a retired cantankerous chef (can you tell) and kitchen designer, I was mildly interested in the idea but wasn’t blown away by it at all. I’d seen these businesses on my travels overseas, heck I’d even queued up with the ravenous hoi polloi and ordered ribs, hot dogs and flaming hot tamales while visiting stateside and was continually impressed with their inventiveness and innovation at squeezing a full kitchen into a space normally reserved for a bed and two stove cooker for wet weekends in The Otways. Furthermore, the food was tasty and damn cheap too! 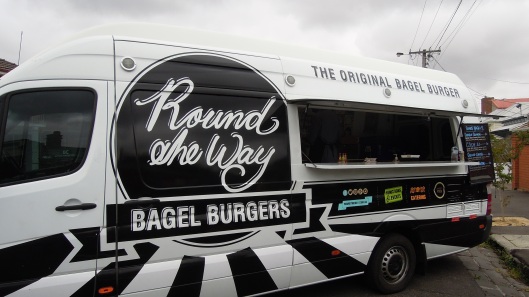 When I compare those experiences with what’s available here in Melbourne I’m somewhat disappointed. While there is a huge variety on offer; everything from wood fired pizzas, curries, dumplings, BBQ ribs, burgers, bagels, waffles, pancakes, lattes, sausages, wraps, pasta, oysters, pies, doughnuts and of course high-end gourmet organic gluten free low fat (but very high sugar) frozen yoghurt, I still believe we are being sold short and over charged. There are many reasons and chief among them is the prevalence of the nanny state here in Victoria. Everything in the hospitality world is so highly regulated with more red polka-dot tape than you can shake a hipster’s booty at, that there’s very little scope for the cheap mobile set-up that thrives elsewhere in the world.

Who hasn’t been to Asia and South America and partaken of the delights available from mobile BBQ stands and gutter side cafes? Who hasn’t picked up that morsel of food that’s tumbled onto the floor and landed beside the dog’s dinner before furtively popping it into your face hole? Come on, hands up, let he who is without hygiene sin cast the first truffle at the croquembouche! 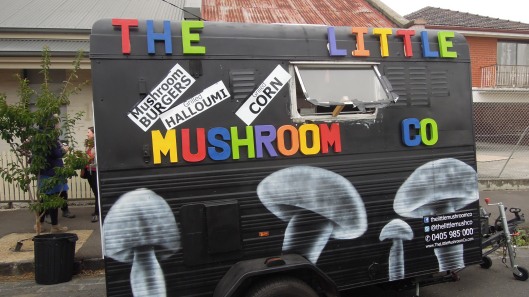 Where Australia was once a frontier colony populated by soap-dodging opportunistic fossickers, gold miners, inventors, sheep farmers, damper cooking bushrangers and cross dressing bearded ne’er do wells, we now seem to live in a society where personal responsibility is negligible and litigation is king. There is no opportunity to scrape the culinary walls of the food scene and see what gives as it is against the law of the land.  Everything is so safe, so wrapped up in rules and national standards and I can’t help but think that it all came from a nasty outbreak of salmonella served up in a Vietnamese pork roll down Springvale way some 20 years ago. 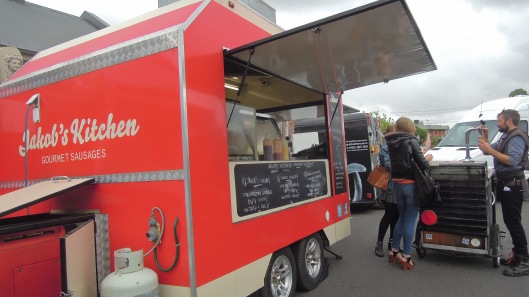 But it goes further and deeper than that. There’s always a hullabaloo in the foodie scene over the latest food Stasi prohibition on artisan food being imported from Europe (and justifiably so) whether it’s Parma ham, fragrant unpasteurised cheese, or live cultured ‘what nots’, the powers that be seem intent on taking the fun out of food and thus the innovation. The Lucky Country has turned into a day care nursery populated by portly people with designer allergies, addictions to watching ridiculously unrealistic food shows presented by pretentiously pompous cravat wearing persons of dubious vintage, and they still can’t cook!

Now, don’t get me wrong, I’m not advocating the wholesale distribution of E. coli, C. perfringes and C. botulinum in our late night dinners via relaxed food standards but perhaps a ‘who dares wins’ attitude might be the way to go. The fines are already sizeable for food born illnesses and justifiably so as they can be fatal in the top and bottom ends of the age spectrum but we are but pests on this planet and we seemed to have survived so far and are proliferating at a rate of knots despite the odds.  I would propose that the onus be placed on the business to excel in cleanliness under pain of bankruptcy and a spell in the stocks on Princes Bridge, and the customer to use their sadly lacking common sense and nous in deciding whether or not a food vendor is up to the task. This would bring down the cost of fitting out and running these mobile kitchens hugely and thus lead to cheaper and more experimental fare for you and me. Perhaps people might actually learn to cook at home? A novel idea I know but we can’t be that useless, or can we? However, I will concede there might be the odd exploding Ford Transit van and nights spent doubled over the worship bowl cursing that ‘totes amazeballs cheap’ fish taco. But ain’t that just one slice of the oft’ precarious but always tasty porky po’ boy of life?

The website ‘wherethetruck‘ lists 127 nationwide members of their site of which 60 odd are located in marvellous Melbourne, and most likely inner city Melbourne where their target demographic of cashed up young’uns and scenesters reside. Social media is invaluable to these enterprises. If you’re heading to a festival or bushland doof and want to make sure that your favourite gluten free sourdough vegetarian Bánh Mì is available, a quick look at their relevant web page will put your mind and inner floral health at ease.

These are the early days where the scene is being set, the battles with council and local traders fought, and the parameters of what can actually be served out the side of a van. Would you order organic free range venison bangers on blue Congo mash, heirloom green beans and a goji-berry-infused-beaujolais-nouveau jus then sit on the street in the winter drizzle and attempt to eat it? Me neither. I’d be ensconced on my couch with a bottle of something alcoholic, the latest episode of Game of Thrones and my cat, I’m probably not alone there either. Perhaps if they rang my door bell and plated up my dinner and fed kitty I might be more inclined to part with my cash.

If you take a cursory glance at Gumtree, eBay and The Trading Post for food vans you’d be lead to believe that it’s a thriving industry, and it is, but with a high turnover rate. I’ve seen bakers’ dozens of them go to the great knackers yard in the sky only to bounce back phoenix like a few weeks later hocking Nepalese momos. You can pick up a minimally kitted out van/trailer for $15,000 or you can go top end and spend stupid money, $80,000 or more, on an imported and then fitted out Airstream chrome caravan and be the envy of the ironic masses. And don’t forget about council trading permits, parking fines, protection money and turf war extras because they ain’t cheap.

$15,000 is a mere drop in the ocean when compared to the high wages stipulated in our laws, and let’s be honest here, Melbourne is not cheap. High wages that push owner operators to work insane hours because they can’t afford to pay junior wages to school leavers, and why would you hire a school leaver with minimal culinary experience to spearhead your business? Beats me. At times I’ve seen up to three moustachioed and tattooed youngsters tripping up over each other as they serve up a menu (really, a menu?) of three burgers and fries in limited confines. Why? Get the chef in there with all his superior time management skills and experience to bang out the burgers, not some travelling backpacker who’s never worked in hospitality before. Mind you, I will concede that due to their inherent desire to partake of the amber nectar, and other such libations, their ability to drive a van and remain under the limit is dubious if indeed they still have a license and we all know about grumpy chefs and customer service. The least said the better.

At the end of the night it’s all about competition and having a level playing field.  Sadly the field is as lumpy as the MCG after Grand Final Day, food costs are skyrocketing due to our mercurial weather patterns and there’s a bit too much money around for the customer to be truly discerning on price and quality. I have a feeling that come the great recession that we have to have, things will level out with an almighty crash bang wallop of pots, pans and entrepreneurial egos.

Somebody is bound to let the air out of the tyres of these mobile upstarts sooner or later but I’m sure they will defy the oft toned cliche of soufflés not rising twice. I venture they’ll find that necessity is the mother of invention and adapt accordingly to find their rightful niche on the culinary highways and byways of Melbourne, much to the annoyance of the local surly fish’n’chip shop owner and insecure downtown eateries.

This article first appeared in The Australia Times