I’d like to continue on from my last post and talk about Hollywood for a bit. So there we have producers and movie moguls making films with happy endings, endings that always involve a spunky hunk saving all and sundry from imminent disaster or whatever. Just like Jesus is gonna save us all from Satan and his evil henchmen. They are reinforcing the whole singular omnipotent God floating around the clouds idea, just waiting to save the world and all who sail in her. We believe that this dude up on high has dominion over all things in our cosmos and can make and mould things to his liking. This is known as The Ceramic View of Creation. As in there’s a guy sitting at a pottery wheel making pots, the pots being metaphors for our worlds. The interesting thing here is that if the potter makes a great pot, let’s say a priceless Ming dynasty vase or something, we all say ‘bravo’ and give him a slap on the back. But, if he whips up something that you’d buy in the local one dollar shop we let him know in no uncertain terms just how bad a craftsman he is. This is the way of white western theism. 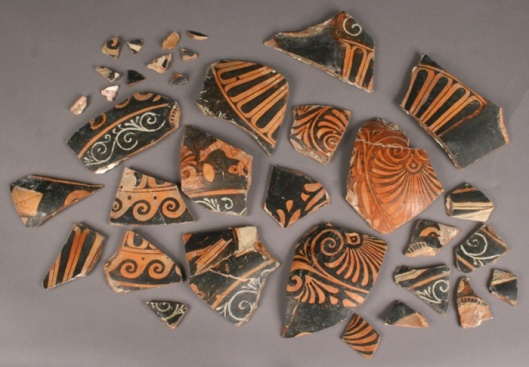 Remember all those documentaries that you watched as a kid where the old dude in the grey hat is fossicking through some dry dirt before letting out whoops of joy and exclamations of pious obedience when he finds a few broken pieces of pottery? Where there’s pottery there’s civilisation. And where there’s civilisation there will be Gods, because Gods cease to exist without humans.

Now let us look at The Non-Ceramic View of Creation. Here there is no potter operating the wheel and moulding lumps of clay into Adam and Eve, he doesn’t have a long white beard or piercing blue eyes and definitely doesn’t do sudoku when he’s waiting for the pots to bake in the kiln. The non-ceramic view of creation centres on the Shakespearian trope of all the world being a stage populated with bipedal idiots and omnipotent Gods alike. The Gods are as powerless as we in that they are just playing a role and have no more control over the lighting or stage directions as we do.

Hollywood doesn’t like this concept, it’s all a bit too vague. Where’s the good cowboy with the never fail six shooter and Devil may care look in his eye? Well, he’s on the stage with everybody else sitting down to some fixin’s and beans. In the morning he’s gonna lasso some steer then have a nap under a covered wagon before making amorous passes on the unlucky lady folk. If he’s lucky he’ll get a poke by the creek and if not he’ll pass the evening gazing up at the Milky Way and life will go on for the players on the great prairies of the west.

This is the Hindu way of thinking about life, the universe and everything. Where the answer is probably number 42; a lamb biryani with papadums and mango chutney. This way of thinking about life takes away the scapegoat and the saviour in one fell swoop and being of the pantheistic persuasion allows you to pick and choose your Gods according to your daily needs. C’est la vie.

What I want to know is how on earth did Shakespeare come up with this enlightened view of the world when he never left Albion? I doubt that he ever read books on eastern philosophy and divinity but I’m damn sure Sir Francis Bacon did. But that’s another story.